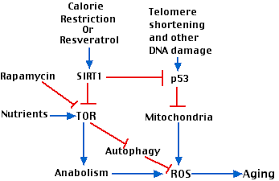 Calorie restriction has been shown to extend lifespan in several different species, but the underlying reason isn’t known. During normal aging, epigenetic changes occur throughout cells in the body. These changes alter the way genes are switched on and off without changing the DNA sequence itself. Levels of one type of epigenetic modification, called DNA methylation, have been shown to roughly reflect a person’s age. To investigate whether caloric restriction affects DNA methylation, a team of scientists led by Dr. Jean-Pierra J. Issa at Temple University examined the epigenetic profiles of mice, rhesus monkeys, and humans at different ages. They then tested whether these changes were altered by a calorie-restricted diet in mice and monkeys.

The team then compared the rates of epigenetic drift to telomere shortening. Telomeres are molecular caps at the ends of chromosomes. Their length has previously been linked to the aging process. Calorie restriction had no measurable effect on telomere length. “The impacts of calorie restriction on lifespan have been known for decades, but thanks to modern quantitative techniques, we are able to show for the first time a striking slowing down of epigenetic drift as lifespan increases,” Issa says.

More studies are needed to better understand why age-related epigenetic changes occur faster in some people than others, and whether altering them could help prolong human life. The study was funded by National Institutes of Health’s (NIH) National Cancer Institute (NCI) and National Institute on Aging (NIA). Results appeared online on September 14, 2017, in Nature Communications.

Barely eat barley? This hearty whole grain can be used in soups, salads, risottos, or cooked like oatmeal for breakfast.

Jaded: Bored or lacking enthusiasm, typically after having had too much of something